I agree. I live in the country and often lose my internet connection.Julia.

PS: Thanks for all your recent improvements. The app is becoming very user friendly.

Yes, this weekend I started thinking on a way to offer offline mode as soon as possible. But it won't come before a few months unfortunately. Publishing iphone and ipad apps are more important right now.

The app is quite expensive considering the fact that it does not offer offline possibility...

I have pushed a new version that allows you to use some features offline.

- You can use the weekplan and the parking lot view.
- You can add new tasks
- You can navigate in the future and the past to add tasks but you won't see any tasks that you haven't loaded before.

Let me know if you find this useful!

+2
Elen Sts 6 years ago
I indeed find it very useful. And it is a great improvement. It is also very pleasing that you listen to the clients. Moreover, I do understand that this idea requires to be paid for. Because it is clever and one of a kind (so far).

However, I am still not ready to pay the amount of money for the app that is requested. My argumentation is simple. It is not the only application I use.

I use note-keeping application. They expect me to pay them 5euro a month . They say: "It's not much"; and it is true. I also use Social Media Management Application that asks me to pay 10euro. It is also not much for the application, considering that I pay as a single person, not as a corporate-level client. And then one more and one more... My costs already go far beyond my monthly health care costs...

Just because every one of these businesses think that: "It is just one application you pay for and it is not that much". Now Weekplan asks me 19$ (!!!) a month or 84$ for a whole year above all that. It is explained as being "not much" (again) for the advantages that I will have. And I agree that it is not much, but only in case we will forget that this is not the ONLY application we pay for every month.

It does not make sense for me and for a lot of people with the same level of online application use.

First I would like to thank you for taking the time to share your insightful ideas. This kind of comment really helps me reflect on what I am doing with weekplan.

The pricing strategy is a difficult topic. I have experimented in the past with a lower price point and the overall revenue was impacted negatively because of it. Since I raised the prices, the revenue is growing.

Because I don't have a team working with me, I also prefer having fewer customers to support.
As I grow the team and polish the application, I will also be able to broaden my target audience and handle more support tickets.

But I have heard what you are saying, I will offer a sale for weekplan's subscription to experiment on the pricing once again.

0
Elen Sts 6 years ago
I totally agree with your argumentation. Thank you for your answer.

0
Mateus Gundlach Ambros 5 years ago
Aymerci, any evolution? I am testing WeekPlan and because of its really really poor Android App and not being able see a quadrant per week or month, I am just about to forget it.

0
Aymeric (Founder) 5 years ago
Yes, the Android app will work offline (and the iphone app works offline already) but I have decided not to support offline for the web version as the percentage of people being offline while on their desktop computer is rather small in comparison to the effort it would take to make WeekPlan offline friendly.

0
Mateus Gundlach Ambros 5 years ago
Perfect. Would like just the offline Android app. But what os the deadline for this improvement?

And, what about the quadrant in a monthly or weekly view?

0
Aymeric (Founder) 5 years ago
> But what os the deadline for this improvement?

The UI is ready, we need to code the integration with weekplan.net... so within two months is my guesstimate. 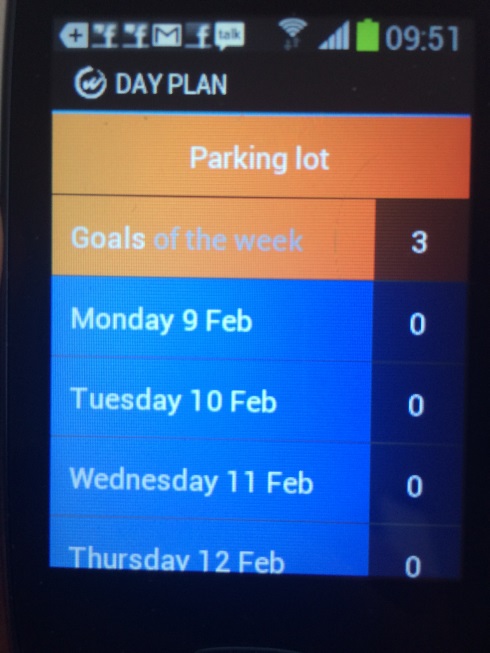 0
miori 5 years ago
is the integration ready? how do you configure it?

0
Grace 5 years ago
I'm sorry but our developers are still cleaning up some few things. Will keep everyone posted as soon as this is fully resolved. Thanks for all your patience!

"Yes, the Android app will work offline (and the iphone app works offline already) but I have decided not to support offline for the web version as the percentage of people being offline while on their desktop computer is rather small in comparison to the effort it would take to make WeekPlan offline friendly."

I'm disappointed to see this. I think you may underestimate the number of people who fall into this situation. Anyone who travels regularly (many consultants, sales people, etc.) is generally offline while on planes, which is a perfect time to sit down and plan your next week, clean out your parking lot, enter followups from your last trip's meetings, etc.

Likewise, such people then spend time on customer sites where it is difficult to get Internet access in many cases, especially if only there for a short meeting. Being able to directly put todos into the tool would be much easier than having to jot them in Evernote or on a piece of paper and input them later. I don't carry a tablet with me when I travel, as it adds extra weight and things to get lost or broken, and while the phone app is fine for an occasional entry or lookup, it can't replace the desktop app for really working. Plus, my phone is turned off and in my briefcase during client meetings...I'm not going to pull it out to look things up or make entries in front of a customer. As long as this is the case, WeekPlan wouldn't be able to be my system of record for tasks, which is too bad as I really like what I'm seeing so far.

Is the Android App capable of working offline? I thought it was available, but when I tried in a Coffee House without internet today, it errored out on me. In order to go to the paid model, this is critical for me.

i am also very disappointed to hear that there is no offline mode. google calendar integration is not the same as being able to c all the quadrants and available options in one glance. i was ready to pay the 84/year as this is the perfect app tor me but the lack of offline mode is a deal breaker for me. truly disappointed. to the Developer: keep up the great work! pls do let me know if the offline feature changes: natalie.brown416@gmail.com

When would you need offline mode? Do you live in the countryside?

Aymeric, I have a Tablet which I use as a work tool, and it has no 4G/LTE, only wi-fi connectivity. When I'm outside the office there is no possibility to use Week Plan. Even if it had 4G/LTE, I would have to purchase internet from the Telecom. So, to use Week Plan on my tablet when I'm not at the office, I would have to pay the subscription + internet. In the end it's financially unfeasible.

In my opinion, offline mode with auto sync when connected would be a great pro feature.

I also would prefer offline mode for the Android app. One example: I travel by train in Russia and the Internet connection on the cell phone is intermittent, so I would imagine this could be one case when I'd need the offline mode.

Hi there! For now, you will need an internet connection to use the Android application. No worries! We have noted this suggestion and our team's working to implement this feature soon!

Having a week plan is very essential for the success of any business. The posts that are shared here on the page explaining the importance of planning are real eye openers. Keep on sharing more and more posts like this. Thank you.